I don't remember going to the beach when I was a little kid; which is strange considering I'm from Miami.

When I got to high school however, I tried my best to make up for lost time, spending a decent amount of weekend nights (and skipped school days) on South Beach - the closest beach to our house. But when South Beach is your neighborhood beach, your idea of going to the beach is slightly warped, and culture shock settles in when you realize that "the beach" (or the shore, depending on where you're from) isn't about drinking your way through the day or keeping count of the number of topless women running around.

For most, the beach is about time with friends and family, cruising the boardwalk, eating fatty food and digging a large hole in the sand - all activities pretty much mandated in Rehoboth Beach, DE.

One does not get from Arlington, VA to Rehoboth in the blink of an eye, no, we had a three hour drive, and a lot of twists and turns ahead of us.

Once you get past DC, there's not a whole lot aside from Annapolis, a shit load of corn fields, and an awfully large body of water between you and the Atlantic. While we quietly passed Annapolis by, and the corn fields didn't offer us up much trouble, it was a tragedy on the Bay Bridge that put us in bumper to bumper traffic Sunday morning, and scrambling to find shelter Sunday night (more on that later).

Beyond the Bay Bridge the drive to Rehoboth is remarkable in an unremarkable kind of way. There's a whole lot of nothing out here - real country nothing that reminds you that there is life outside of the city, and begs the question, "Can you imagine living out here?".

Far away from the hottest new French bistro or wine bar, you can't help get a sense that the people out here respect food on a whole different level than we do here in the city - probably mostly because they grow it. Especially when you get into Delaware, you'll see roadside stands with all kind of produce, from tomatoes to "lopes", why go to a farmers market when you've got a farm?

Like most ventures the memories are truly made during the journey, and in a sea of fresh produce, a sign called out to us like a beacon calling us home: Kiwanis Chicken BBQ. Now we had seen one of these signs when we first entered Delaware, but the BBQ was on the other side of the road, and with Apples driving, there's almost no stopping her. Luckily however the Kiwanians of Georgetown, DE decided to set up shop on the Eastbound side of the road, complete with a sign indicating that the chicken was ready; so looking for a late breakfast/early lunch, we pulled in and took our chances. 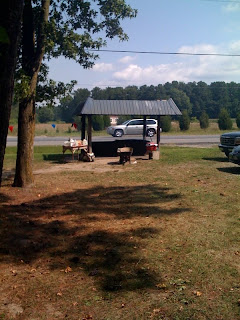 We were probably the first customers of the day, and it was clear that we were from out of town. Pulling up in a convertible Mini Cooper, we must have looked like a couple of rich kids from the city who had nothing in common with the four guys manning the big open pit grill, most of whom were shirtless, and the girl working the register (it actually couldn't have been further from the truth - Apples and I both being from the country and my family having been involved in Kiwanis for three generations). 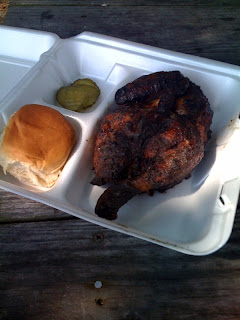 The menu was simple: you could either get a half chicken, or the chicken platter, which came with a roll, a bag of Herrs potato chips, and pickle slices. That's it. No hamburgers, no hot dogs, just one thing, done amazingly well.

I don't know how to describe this chicken in a way that sounds half way reasonable. I'm not a fan of absolutes; I don't like declaring anything the best, the most, the least. But this was the best chicken I've ever had. Now, if I would have ordered this at a restaurant, and had it served to me by a waiter, would I feel the same way? Probably not. But sitting on a picnic table somewhere near Georgetown, Delaware, eating a piece of chicken that came right off the grill, that was seasoned perfectly - just the right amount of salt, pepper, spice and char - and was perfectly moist, you can't get much better than that.

Food is best when it connects us to something bigger than ourselves, when it speaks for the people who made it, and when allows two yuppies from the city to enjoy something so basic and simple, it would be seen as a novelty here in Washington. We ate a lot during this trip, but this is the one place I would insist on visiting again, if only to allow a molecule or two of smoke from the grill to pass into my nose and live forever in a studio apartment in my lungs.

As we got back out onto the road, all wasn't chicken and pickles. The sky was starting to darken, and we had to pull over to put the roof up. We pulled into Rehoboth Beach just as it started to rain, and just like that, it looked like our time at the beach was over even before it began.