There was absolute silence. Actually, there probably wasn't. With kids jumping around and pots and chopsticks clanging together like some sort of delicious culinary chorus, the air was as heavy with noise as it was with the smell of broth and beef. But I couldn't hear any of it, I was too focused on the task at hand.

Shabu Shabu, though a funny sounding name, is very serious eating. Originally from Japan, the Chinese have embraced this way of eating - taking raw meat/seafood, cooking it in boiling broth, and then using that broth with noodles to make a soup - and have seen this incarnation pop up in hot spots ranging from Hong Kong to New York. 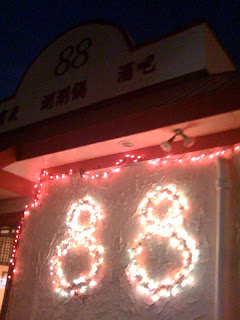 Apples and I visited Bob's 88 Shabu Shabu this past weekend in Rockville, a humble house of culinary delights in sea of flashy lights and chain restaurants. Once we settled in and made our way through the menu, we both decided to get separate protein options - she got the seafood and beef, and I got the lamb and pork - and we split to appetizers, steamed buns and garlic cucumber.

The service is incredibly fast and properly impersonal - you're not here to make friends with these people, you just want your food, ASAP.

The first thing you'll get, and these come out pretty much right away, are the pots filled with broth. I'm fairly sure it's either a chicken or fish based broth, but either way it's fairly light and serves its purpose. Shortly after, your actual food comes out. You'll get two plates, one with your protein - I got a large amount of raw lamb and pork rolled up into manageable pieces, where Apples got a fantastic variety of seafood, from head-on shrimp, to oysters, scallops, and a big hunk of white fish. 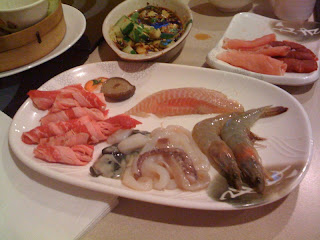 Along with the meats and seafood, you'll get a big plate of veggies, including what I believe was some sort of spinach, cabbage, mushrooms, noodles, and an egg - the last two being very critical for the last portion of the meal. 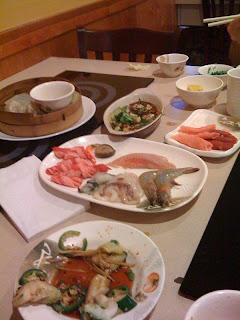 Once everything is set down before you, the process is pretty much pure primal instinct: put the meat in the boiling broth, let it cook, add vegetables, and then eat.

Along with what you have brought to your table, you also have the option of visiting their sauce cart, which is basically the salad bar dressing equivalent, where you can load up on chili sauces and fish sauces and soy sauces, and well...pretty much anything else you can turn into a sauce.

Now if this seems like a lot of food, it was. But think of it more like a four course meal than just one big dinner (in include dessert in that, which I'll get to later).

The appetizers which came out first were fantastic. The cucumbers were nicely crisp and properly garlicy, and the buns were full of juicy porky goodness.

All of the meat was about as tender as you'd expect - the real trick being to cook it just long enough to be safe, but not to over do it - less than a half minute in the broth will do. The seafood and vegetables were also about what you'd expect (assuming your expectations are fairly high) - fresh and flavorful.

My favorite part of the meal was once all the meat was gone, when I could add my noodles in and make myself a couple bowls of soup. Add in some spicy chili oil and sweet chili sauce for a great contrast in flavors that blends well with the broth that's somehow absorbed everything you just ate, and poach the raw egg you're given for a little texture and sweetness - this may be my new favorite soup (sorry Pho).

After you're finished with all of that, you can't pass up on dessert, especially shaved ice covered in coconut milk and fruit. We decided on lychee, mango, and taro. I haven't had lychee since I lived in Florida, and taro - a root vegetable, provides a pleasantly dull hearty flavor to a very light dish.

It's hard to sum up Bob's 88 in a single post, and honestly, words can't do the experience justice. It's interactive, interesting, and simply incredible. With so much amazing food in front of you, it's easy to lose track of the families having fun and the whirl of activity around you; but all you'll hear is silence, silence and slurping, as you work your way through one of the best meals you've had in a long time.

I've never had shabu shabu. Thanks for the interesting and informative post. I think I might try it the next time I'm in the area.